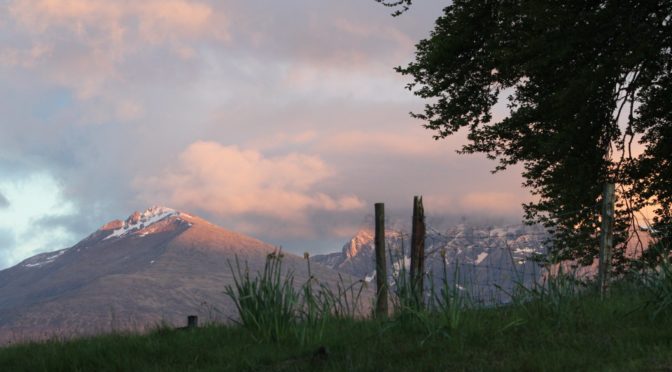 I was lucky enough to spend a few months wandering wild places and towns in England, Scotland and Wales in April and May with my little family.

With little time for writing, it is probably all going to emerge in bits and bobs and scratched together from hasty notes and reflections.

My first cup of tea in the very early morning outdoors in the mountains of Scotland was magical. It is a time to listen and watch, so I fight the urge to photograph, and just try to etch mornings like these in memory.

Although tempting to gaze south-east at the stunning Ben Nevis range, which I certainly did photograph (above), I turned my back on such well-known beauty, clutched my tea and crunched through frosted grass to the edge of the western boundary. From there, the edge, I could watch the cloud transform the smaller mountains to the North and West, where the sun and cloud were playing.

I have no words morning. There was and complex bird song in the forest. Birds I can’t yet name. The light on the mountains was salmon-pink and sherbert-orange. I stood still and saw cloud spilling down the hillside, creating almost the sense of a rainbow as it played with sunlight on slopes. I heard the wings of birds in the stillness. Nearby, below the grassy slope, I heard the soft tread of sheep.

Wispy and slow, came curling down towards me, brushing the tips of pine trees, before quietly and secretly seeping through every branch. Dampening everything from birdsong to vision, there is nothing more gentle in nature that steals away so much beauty, creating a new beauty of . It was hypnotising, leaving nothing but a veil of white in its wake. The gentlest wave.

Tea in cold dregs, I turned around to go back to the cottage to find the cloud had also been creeping down my neck behind me.

All was cloud and cloud was all, and that is all. For now.