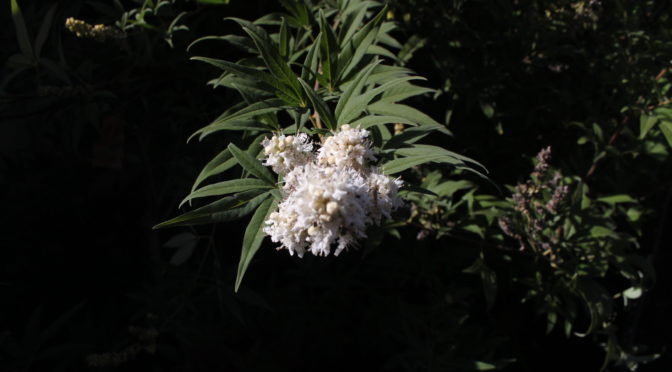 Although months later than usual, today I did one of my favourite annual rituals of taking a yield of beautifully scented wood from the Vitex agnus-castus known along the ages as Chaste Tree, Abraham’s Balm, Monk’s pepper amongst other mysterious names.

History of The Chaste Tree

Chaste Tree has an ancient history, with its use referenced in literature and poetry. It is still used today in herbal medicine practices.

In a medieval poem The Floure and the Leafe which was written anonymously in Middle English, a beautiful lady in white wears a crown of Vitex agnus:

“On her head, of leves fresh and grene,
So wele wrought, and so mervelously,
That it was a noble sight to sene.
Some of laurer, and some ful pleasantly
Had chapelets of woodbind, and sadly
Some of Agnus castus were also
Chapelets fresh. ”

According to its effect on the human body, if Chaucer’s characters for example, had ingested this herb more, let’s just say that The Canterbury Tales would certainly have less rudey-bits and rumpy-pumpy! This herb could have saved me from SO MUCH blushing as a Medieval Literature student when having to read Chaucer aloud!

I have written about this annual task before because of how seasonal the task feels as a ritual. I only began to value it in this way, as a recurring seasonal task after spending six months with my head in a permaculture course. I discovered that the actual yield is not about measuring the yield of wood…which is quite small.

It’s more about connection to the cycle of seasons. Thinking about the ancient history of this tree, valued enough to be in poem and story. A sensory trigger from the feel and scent of the beautiful wood.

You can cut Vitex down to ground level and you can grow it as a single trunk tree or shrub.

What I love about this task is the scent of this wood. It is really unique and hard to describe. It reminds me of patchouli wood perhaps mixed with pine but far more distinct. When dried it retains its scent and burns sweetly.

The white spikes of summer flowers are very similar to Buddleia and attract many butterflies, bees and hover flies. I’ve observed that native Australian blue-banded bees seem to find the white flowers fascinating, even though their preference is for blue hues.

Vitex agnus is just one of those quiet plants that I don’t see often, but is a special, brilliant and appreciated part of my small permaculture inspired garden.