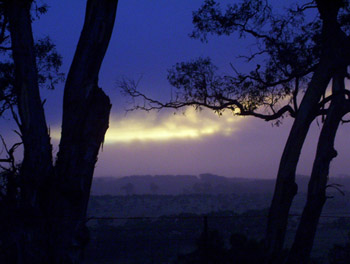 I love this -evenings that remind me of storms past, seen years before from the top of the hill.

Tonight reminds me. I’m in a different place watching, but it feels the same.

I’m standing in the dark garden, meeting the edge of the storm, after a scorching hot day.  Still slow and forming, gentle, I still hide under the porch, with a cup of tea in hand.

The warm night is scented with native frangipani flowers that reaches me on the breeze that bustles the dry leaves over stones and brick. They sometimes have a spooky rhythm sounding like legged creatures approaching. I don’t let my imagination quicken my heartbeat.

Thunder is only lazily grumbling as if the sky has just woken up. Half-hearted flickers of lightning like a wet match trying to catch. The first heavy slow drops of rain dolloping themselves on dry leaves like a half-asleep child fingerpainting. A spot over here…and a spot over there…

It’s like the whole storm just can’t really be bothered to pull itself together and crack on with it. But it will.

I can’t tell you how warm, fuzzy and buzzy I feel, every time Spring bursts the world into life. I honestly drift off to sleep each night dreaming of flowers, fruits and vegetables and smile when I wake up and hear the birds singing the morning in. What a great time of year.

A bushfire is burning approximately 12 kilometres away as I type. It’s 20:10pm and luckily cooling down. It’s the nearest a fire has been to our farm in the 2 years that we’ve been here. I have to say, it’s not a nice feeling to get an email at work (I subscribed to CFS media releases) that tells you that something wicked is on the horizon.

When you can picture the location and the exact houses under threat, you really really feel for those (animal and human) who can’t get back to their homes tonight.

Here are some photographs from a few hours ago, from the back of our chicken sheds.

Even the kangaroos were extremely skittish tonight as the smell of burning bushland hung in the air.

A giant orange moon rose behind the hills. At one point I thought it was the glow of the fire, until it sneaked a peek over the hilltops. I was so excited to have a tree-free view of the moon that I wrestled the telescope into the yard. It’s a bit awkward, sort of like trying to cuddle a dalek. (even destroyers of the universe need a hug).

Although I had a sucessful moon photographing moment this time last year – (in fact – spookily nearly to *the* day!) tonights wasn’t as sucessful, infact you can even see the telescope lens. How amateur. I’ll never make an astronomer. I was raking leaves and looking at the ground exactly when the recent meteor went through the skies. I’m a cosmic failure.

Far over the misty mountains cold
To dungeons deep and caverns old
We must away ere break of day
To seek the pale enchanted gold.
Tolkien

Yesterday morning as I was letting the dogs outside at 6am, I saw the spookiest moonset. On the horizon over the sea, (in the direction of the usual summer sunset) in total darkness was a vividly orange moon peeking out of darkcloud. It was like a nightime sun or an eclipse.

Then tonight, the full moon rose in the east over the hills, large and quiet, just rising into the pastel sky in it’s friendly way like it does. There was definitely a promise of spring in it’s colour.

Seeing it made me think of the Harvest Moon but I read on the Horizon site that a Harvest Moon is later in September.

I love the old names for the moon, but I still struggle with the southern hemisphere dilemma. I found following the seasons was natural in the UK – you could almost feel each solstice- Yule is so Decemberish that even the most disconnected person can remember that, but here I seem to be having trouble staying in touch.

Anyway, all this has made me realise that I need to refresh my southern hemisphere knowledge and perspective . Handily this week on Sunday, I planted a load of sunflower seeds just before the full moon which according to permaculture and biodynamic theory is pretty good timing for seed planting.

I can’t find out much about the correlation of old moon names with the southern hemisphere and I’m not sure if our winter moon at this time should be the February equivalent (Old Moon)…or whether it really is the grain moon, but if we do swap, here are the Southern equivalents:

I mostly expect winter to produce misty haunting twilights and eerie light, but summer can turn up a surprise or two. This was sunset on the 1st January 2006. The photos were taken less than a minute apart.

My favourite time of day is twilight. You know, the only time of day when the worlds of possibility and imagination seem nearest. Tonight was beautiful. February usually isn’t this rainy and cool and sunsets are usually fiery and dramatic – the hot colours of a hot day — and yet here we are on a night filled with autumnal promise. The green man seems restless with the seasons this year.

From my house, I can see down to the sea across the vineyards about 10 kilometres away. Ten minutes ago, everything was still, except for loud happy verses of frog-song. It is as though they are singing the rains in. Gully winds are starting to pick up. They seem to come from all compass points and meet us in their epicentre on our hill. The trees across the hills beyond, still wet from earlier showers, shake their wet leaves sparkling like daytime stars.

I notice the clouds next. Bits break off and float, but with life, they seem sentient as though purposefully directed as they scud happily across the hill. Fragments seem to be falling lower, nearly touching the tree-tops on our hill, little cloud arms reaching out to catch a leaf or two. A black cockatoo flies over, keening and I hear sea mists and rain in its voice – they sound like old spirits.

The southerly sky darkens and fades in a gradient towards the north. I feel as though I’m standing on the precise shadow-fall of the sun on the earth – in between day and night and two weather systems. To the north, the blue sky hangs clear – the clouds speed towards the blank canvas of the north, like a loose iceberg seeking open sea.

Shards of bark that have been shed from trees scuttle along the ground sounding like footfall of hidden denizens. The trees shake their leaves in the air looking like mad tambourinists. My hair curls around my face, and I let nature tousle it into a basketwork of eternal knots as remembrance of this unexpected cool February twilight.

Dizzy winds get crazy now, lifting up bark and leaves and dancing whirling dervishes by my feet. I step out from under the veranda to meet the rain and turn around to be hugged by a rainbow arcing over the sky behind me.

Then a low growl, almost indiscernible but perhaps thunder or maybe the hill sighing in content about what now falls on its dry skin. Rain in dust-like motes falls across the hills. Pushed horizontally by the winds as though someone is sifting cloud down on the land.

The seeking cry of the black cockatoo sounds again, a herald – the rain piles in. I retreat as the sun sets on this February day when summer held its breath and let autumn in.